It looks like a new and improved Power To Choose (www.powertochoose.org) has finally been released, and hopefully the changes will help to remove some confusion from the deregulated Texas Electricity market. As I have written before, promotional electricity rates have been a huge source of confusion and angst for Texas consumers for years.

To explain, in brief, the problem is that customers shopping for Texas electricity don’t understand the market very well and are often oblivious to the difference between Fixed Rate Plans or Variable and Indexed plans, much less the nuance of a Variable Plan with a Promotional Rate. Basically, people (particularly ones from other states or regulated areas) pick the first plan they see, with the lowest price. In all fairness, this is a pretty standard shopping strategy used by loads of people whether they’re shopping for electricity or non-perishable foodstuffs. But in Texas it can get people into trouble.

The most common complaint I get at Texas Electricity Ratings is customers complaining about their variable rates increasing exponentially after their first bill. They feel cheated (somewhat understandably) even though it’s written right there in the fine print. Fortunately, the new changes to the Power To Choose website should help remove some of that confusion and rank anger.

The picture above is the new header section of Power To Choose. The specific additions are the new red tabs at the top, labelled All, Fixed, Variable, Indexed, Promotional Offers and Prepaid. The new tabs should allow for much easier navigation and reduced confusion for the types of plans for which customers are shopping. But the big tab is the Promotional Offers Tab.

My understanding is that all variable electricity plans which are advertised at the promotional rate (the promotional/introductory price that typically lasts only 1 or 2 billing cycles) will have to be placed under this tab. The plans that exist under the variable or indexed tabs will have to be listed at the current price of the plan by the REP when it isn’t priced at the introductory rate, or potentially some kind of average or historical rate. The important part is that all of the plans under the Variable Tab will be listed at a rate that is MUCH closer to the one a customer will be paying when their promotional term expires. They won’t (hopefully) be blindsided by a rate that doubles after their first bill. And the very act of having to click over to a Promotional Offer tab should, by the act itself, be informing shoppers that the plans listed there are special or non-standard in some fashion.

To help clarify plans that are promotional/introductory rates, there is also a new link that when hovered over with a mouse, expounds on the promotional plan: 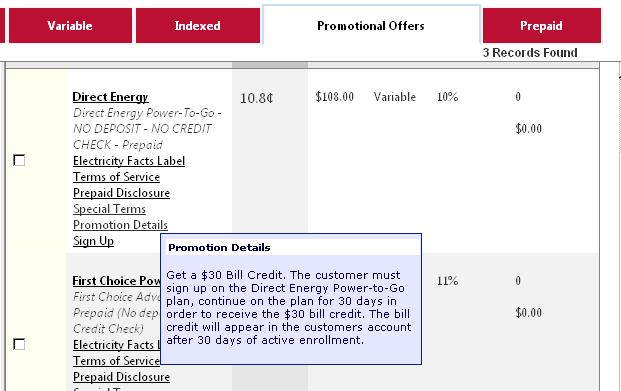 That should go a long way in helping people understand what to expect when their promotional rate expires. Of course, right now, the plans aren’t properly organized and the rates aren’t correct in regards to promotional rates versus estimated regular rate. In fact, right now the only plans listed under the Promotional offers table seem to be pre-paid plans. So clearly there are some growing pains, but this is a net positive.

I believe this is one of the best things that the PUC has done in years in terms of helping reduce confusion in the deregulated electricity market. I honestly think this will have a tangible effect on people no longer getting burned by promotional rates for variable plans. After speaking with the PUC, the deadline for REPs getting their plans correctly input on PowerToChoose is this Friday. I’m sure some electricity providers will drag their feet or make some mistakes, but I imagine those will all get straightened out quickly. All in all, this is great news for consumers.