Griddy electricity is a new concept, one that is gaining quite a but of popularity in Texas for electricity shoppers. On the back of a big traditional marketing campaign, as well as active social media work for younger shoppers, Griddy has started to make a name for itself in the Texas electricity space. So what is Griddy, and how does it work? And furthermore, is it safe?

Griddy is a company that has introduced a new model as a retail electricity provider in Texas. Instead of charging a fixed electricity rate, or even setting prices, Griddy has used their technology interface to sell electricity to their customers using the real time energy rate from ERCOT. In other words, Griddy buys the electricity and sells it to customers at the wholesale price any given minute in Texas, with no markup. How do they make money you ask? Well, they charge customers a monthly subscription fee to use their service, $9.99. Customers link their credit card card or bank account to Griddy and deposit money into an account. When that account is used up, Griddy will hit the payment option on file and reload a custome's account. In this manner, Griddy works similarly to Pre Paid Electricity.

Is it safe to get electricity from Griddy?

This depends on what you consider “safe,” but in the sense that Griddy is a respectable provider that can get your electricity turned on, yes, they are absolutely safe. They are a licensed REP (retail electricity provider) in the Texas marketplace. So what are the concerns with Griddy?

The biggest risk with Griddy is the inherent customer risk, without question. What does that mean? Well, traditional term electricity plans guarantee a rate over time based on usage. So no matter if 10 plants go down, and the cost of energy becomes excruciatingly high, a REP is going to provide you electricity at the rate they promised you in your contract. If they can't do that, they will go out of business. How is this different from Griddy? Well, Griddy just passes through the real time charges to customers, so if power plants go down or Texas has a particularly hot summer, customers might be buying electricity at the real time rate.I believe the max realtime rate is 9 dollars per kWh, which would be 450x what a Griddy customer might normally pay. In the Summer of 2011, Texas missed breaking the record of consecutive 100 degree days by just 2 days. In July and August, there were 40 days over 100 degrees. During this time period, pricing for the real time market often spiked to between $2-3000/MWh. In other words, when plans go down or the weather goes to the extreme, a Griddy customer has to buy electricity at the market rate, which can be astronomically higher than a guaranteed contract. If you don't think this kind of thing is a possibility? Here's a Bloomberg article, from May7th of this year, about massive price spikes in the real time market. And if you check out the map below, you'll see the real-time electricity market goes as high $9,000 per megawatt, or $9 a kilowatt. 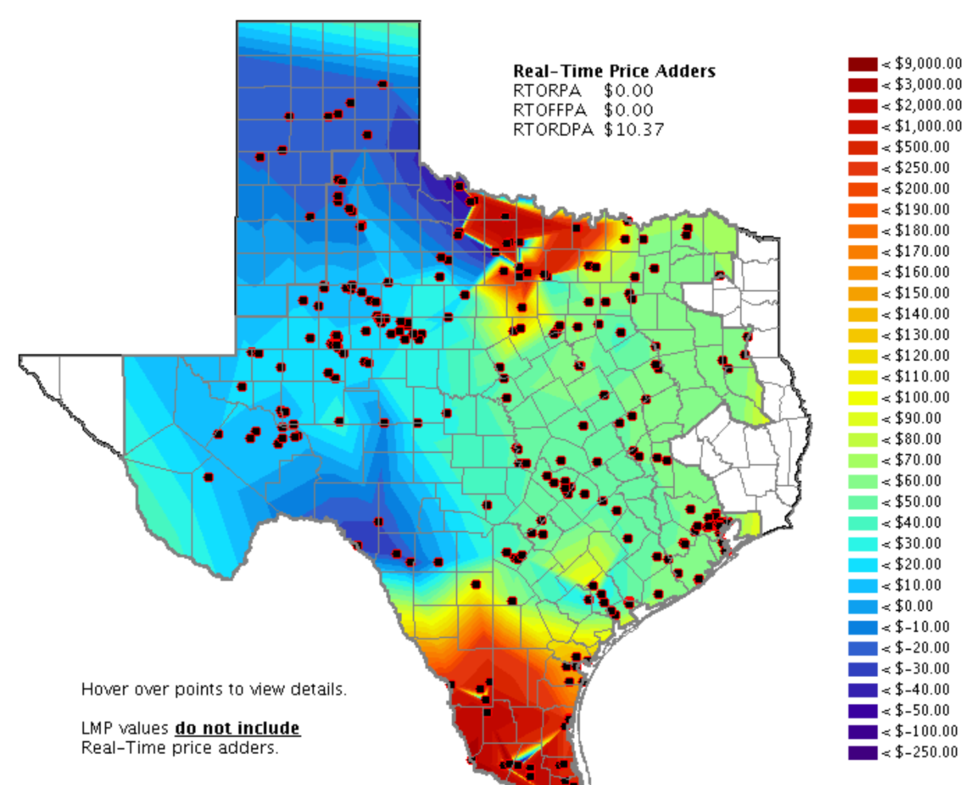 Continuing on the point above, what happens when weather doesm't cooperate and customers have to buy energy during price spikes? Well, the answer is much, much higher bills. But how much are we talking about? Well, peak energy spikes are usually only temporary, and usually only during a 4-5 hour window any given day if there isn't enough energy to meet demand. But what does that meant to a customer? Well, a normally 75 dollar bill wouldn't suddenly become $33,750 (or 450x). But a $75 bill could reasonable suddenly become a $250 bill with just a few days of prolonged price spikes. A $150 dollar bill could end up at $500. Griddy advertises their potential savings as 30% over the course of a year, and even if that is true, it doesn't change that for a few months out of the year, customers could end up being bills that are 2-3x larger than normal. And for some people, that might be fine. But for anyone that lives on a loose budget, much less a strict one, unexpectedly large bills from Griddy could pose a VERY big problem.

Does Griddy have hidden costs? No, at least not in the sense that customers are used to seeing from overly complex electricity bills. They are completely transparent, and that is outstanding. That being said, when Griddy calculates their savings to customers, it's unclear if they are also including the monthly $9.99 subscription charge to be a Griddy member. At a cost of $120 a year, to many folks that is the equivalent of a whole extra month of electricity. A customer could essentially be paying for 13 months of electricity in a 12 month year. For some customers, that might might sense. But again, for anyone more budget conscious, it is important to consider that you're paying a monthly fee for less security and more potential volatility, but also the potential for savings.

What are the Benefits to Griddy Electricity?

Well, the primary benefit to Griddy is the cost. With energy charges on the Texas grid between 1 and 2 cents per kWh, Griddy offers the opportunity for customers to save money. Many current electricity plans have energy charges between 5-10 cents per kWh. So yes, Griddy does have the ability to save customers money. Of course, that energy charge doesn't include the pass-through charges and TDSP (Transmission and Distribution Service Provider) fees. In other words, that energy charge doesn't include the money customers pay for monthly to Oncor or Centerpoint to actually deliver electricity to a custome's home. When you average in all those charges, a customers average kWh is more like somewhere between 7 to 9 cents per kWh. Currently on Texas Electricity Ratings, we have plans that average between 6 and 10 cents in Dallas and Houston, depending on a customer's monthly usage. Which brings us to usage.

A big benefit to Griddy might be monthly usage. Most traditional electricity plans charge different rates at different levels of usage. The same electricity plan from the same company can charge you one rate if you use less than 999 kWh in a month, and a different rate if you use between 1000 and 1999 kWh, and yet a third rate for 2000 kWh and above. Sometimes this can create huge bill swings, or situations where a small apartment bill might be the same as a small house bill. With Griddy, there's no differing price confusion between usage, the customer is just getting the real time electricity rate passed directly to them. So in this way, customers who have usage that straddles two different tiers of usage prices, they won't be penalized for using too little or too much. They'll simply pay the real time rate all the time.

Is Griddy Worth It?

Like all questions with the different needs of customers and the bevy of plans in the Texas electricity marketplace, it depends on the customer and their own needs. Are they on a tight budget, or can they afford to take a chance on savings? Can they take a long term view of their electricity bills, or could a really high month make things too uncomfortable? None of these questions can be answered save by the individual who is signing up for electricity service. But if some folks have a propensity to gamble and don't mind risk, Griddy could be a fun option for them. For folks with a tight budget and an aversion to risk, the protection of a long term electricity plan might be a more comfortable choice.